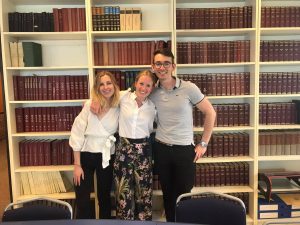 “What a journey”, probably the thought that crosses our minds the most in the aftermath of our Manfred Lachs Moot Court experience, well, next to key-tips like “embrace the questions”, “no stress” and “not too fast”, but we’ll get to that later. While this journey only started in earnest at the end of the first semester, when we were selected to represent the ULB in the international competition, we first became acquainted with the case during the first semester pleading course. Did we think we had already obtained a nice grasp of the case back then? Yes. Did we quickly realize how little we had thought of until that time? Yes as well.

But don’t let that scare you, no matter whether you have studied international law for a few years or have only seen the basics, knowledge of international law, while useful, is only part of the story. Rather, it’s endurance, the willingness to go on, to keep on studying, writing and researching, both alone and as a team, that is both your primary asset during a moot court as well as a skill you’ll learn to develop even further. Believe us when we say, you’ll never be idle for long during a moot court year.

On that account, the Manfred Lachs International Law Moot Court, like any other moot court competition has two parts: writing the memorials and performing the oral pleadings. The Lachs competition equally offers the additional challenge of framing its facts in a space law context, even if the many problems themselves are often of a more general nature, from questions on sources to solving problems via analogies. More practically, a moot court is an excellent exercise to make a transition from a more academic style of writing to a more demonstrative style fit for a later life at the bar or elsewhere.

Of course, what most people, ourselves included always look forward to, is the actual competition against teams from all over Europe, preferably in a fancy location. Sadly, because of COVID, we never got to see Vienna and instead got to cozy up in the international law center’s library and meeting room, coffee and biscuits included of course. In the end though, virtual or real, the many months of preparation stayed just as instructive and enriching, from structuring arguments, to clear explanations, intense research, stress and time management, there’s so much Moot Courts help you with like no other, skills that will prove vital for any professional choice later on. 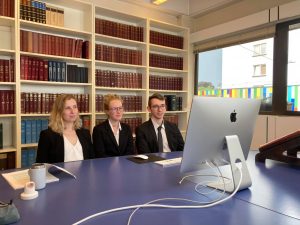 During the week of competition, stress and adrenaline hit like a train, but in a productive way. All of the past year’s work paid off and we barely even flinched against our competition in the preliminary rounds. Tired, but satisfied, we finally had a relaxing dinner and some drinks together and went home to rest, happy with the moot court experience we had been through. Time truly passes quickly when pleading, at least when judges don’t ask too many questions. No matter what questions you’re prepared for, judges always manage to find new ones. Still, even in doubt, there’s only one thing to do: embrace them and answer with confidence, even if you’re not really sure at all.

As the competition was concerned however, there was no rest for the wicked, to our amazement, and the detriment of our sleep schedule, we moved on to the semifinals. Now, the drive to see the competition through to the end really kicked in and it was a good thing that it did. The next day’s opponents were as good as you would expect from semifinalists but nevertheless, it seems we were not meant to “go home” just yet and on Friday we made ready for one final round, the European finals. Sadly, the British team proved just too good at embracing the questions during their pleadings and, pleading calm and collected, they managed to get the better of us. That didn’t mean we went home empty-handed however, as we still got the prize for best written memorial and in the end, after all that was written, spoken, learned and done, champagne corks did blow.

No matter where you end up in the competition, it’s an incredible journey, filled with learning and fun in equal measure, it’s a team effort, where you learn as much from articles as from your teammates and truly all the work aside, there’s nothing we would have rather spent our time on during the past year than this Moot Court.