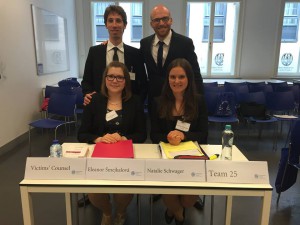 Dear readers, what follows is the adventure of three students of Université Libre de Bruxelles. I will tell you about the exciting experience that we have lived since when we were chosen to represent our university at the biggest simulation of a procedure before the International Criminal Court: the ICC Moot Court Competition. I want to thank the Université Libre de Bruxelles for this opportunity and especially our coach, Arnaud Louwette, who has believed in us and supported us during the preparation and at the competition. I am, or rather « was », an international student who during his last year of studies decided to acquire in-depth knowledge of a very specific branch of International Law: International Criminal Law.

First of all, a couple of words regarding the competition in general. It takes place every year in The Hague, The Netherlands, and is organised with the support of the International Criminal Court. Teams of students from all around the world meet to discuss a fictional case where crimes within the jurisdiction of the ICC seem to have been committed. Each team is composed of three members, who play the role of the Prosecutor, the Defence and the Victims’ Legal Representative. Each member writes a thirty-page memorial according to his/her role. The preparation starts in early November of the year that precedes the competition, which usually takes place in May. When they get to The Hague, they have to plead in front of leading international experts, who play the role of judges. Each speaker has twenty minutes to make his/her case and answer the judges’ questions. An additional ten-minute rebuttal allows them to reply to each other’s arguments. During their stay in The Hague, the organizers of the competition plan some visits to the main international criminal tribunals that have their siege in the city. Master classes are organised as well, so students can learn from leading experts of International Criminal Law.

Now, let’s talk about our adventure! This year, fifty-seven teams have taken part in the ICC Moot Court Competition. The fictional case concerned the alleged commission of war crimes by a State that was supposed to have launched a cyber-attack against another state in the attempt to seize part of its territory. The procedure took place before the Appeals chamber. The competition has lasted for five days, from May 18 to May 22. The day of our arrival at The Hague, an introductory speech has been delivered by the organizers and the overall programme of the competition made clear to the participants. Then, we have been invited to attend a welcome reception, which has been organised in the competition venue. We have taken advantage from this opportunity to know the other teams, glancing at their badges in order to find our rivals. At the end of this social event we have reached our apartment to start the preparation for the first round of pleadings, which would have taken place the following day in the morning. We have played against Chinese, American, Singaporean, Kosovar, Czech and other teams from all over the world. They have developed strong arguments to which we have replied with determination, displaying a substantive knowledge of case law and international norms and obtaining very good feedbacks from the judges. The final has taken place in the ICC building before three ICC judges. The other participants have been welcomed in the audience room and have assisted to the entire session. In that very moment, we have almost forgotten that it was a simulation. Before leaving, we have had a last occasion to talk with our new friends during a barbecue at the beach. We have shared our views concerning the competition and congratulated each other for the excellent preparation. We are still in touch with some of them.

This experience has constituted an important moment in our academic path. It has been an outstanding opportunity to apply our theoretical knowledge of International Criminal Law to a « real » case. We have tested our advocacy skills through direct confrontations with professionals and other students who share our passion for the International Criminal Justice project. We have learnt a lot from each other and grown together. Thanks to this experience, we have discovered the extent to which this branch of International Law is intimately linked to our nature of human beings and members of an international community that shares the values of integrity, dignity and justice.

In conclusion, I cannot but encourage our readers to take part in the International Criminal Court Moot Court Competition edition 2016.