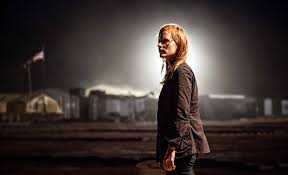 Zero Dark Thirty (2012) is a Hollywood film that depicts the hunt for, and killing of, Osama bin Laden by US forces in Pakistan in 2011. (See the earlier blog by Pauline Blistène, ‘Torture et prisons secrètes: Zero Dark Thirty, I’insoutenable figuration du réel?) Central Intelligence Agency (CIA) analyst Maya, the film’s heroine, was key to finding bin Laden. Her gender has been important in how the film is interpreted as critics debate whether or not it qualifies as a feminist film. An assumption underlying much of the debate seems to be that men wage war but women are peaceful. The issue of torture is central to whether or not Zero Dark Thirty is interpreted as a feminist film, while international law is largely irrelevant.

Zero Dark Thirty breaks with the generic conventions of war films by having a female lead, Maya. But is this enough to make it a feminist film? Maya is a composite of several analysts, including the same female CIA agent who mistakenly believed German citizen Khaled el-Masri to be an Al Qaida member. In 2013 the European Court of Human Rights found that the Macedonian government had transferred El-Masri to the CIA which detained and tortured him as part of its extraordinary rendition program.

Many of the magazine and newspaper reviews of Zero Dark Thirty try to assess whether it qualifies as a feminist film. They propose elements of a feminist film based on the Bechdel test : two female characters who talk to each other about something other than a man. Zero Dark Thirty seems to pass this test, depicting friendship between women rather than romance with a man. Maya’s only friend seems to be fellow analyst and mentor Jessica, to whom Maya reveals that she has had no interest in sexual relationships for the 10 years over which the film takes place.

Beyond the low level requirements of the Bechdel test, that many films nevertheless fail, the political context of the film informs judgements as to whether Zero Dark Thirty qualifies as a feminist film. Michael Moore defends the film as showing how a woman working in the male-dominated CIA is able to locate bin Laden, summing it up as a ‘21st century chick flick’. Yet Zillah Eisenstein disagrees, seeing it as an attempt to justify ‘US war revenge with a pretty red-head white woman’.

‘Gender coercion’ and the torturer as feminist

Since news broke of torture by US government employees and private contractors in Abu Ghraib prison in Iraq in 2003, gender has been an important aspect of the debate about torture. The most difficult questions arise in relation to the depiction of female autonomy and power. In particular, does Maya’s early complicity in, and later ordering of, torture represent the achievement of gender equality in one of the last bastions of male supremacy or disqualify the film from being considered feminist?

The film revisits the questions that arose in US debates over the role of women in torture in Iraq. Exemplified by the image of Private Lynndie England leading a naked male detainee on a dog leash in Abu Ghraib, do women taking an active role as torturer, rather than a passive role as victim, indicate an advance in the status of women? Does the fact that a female CIA agent who played a key role in locating US enemy bin Laden through detective work rather than war indicate a triumph for gender equality as promoted in the US over misogynist Islamic fundamentalism?

The term ‘gender coercion’ derives from the Schmidt-Furlow Report, a US military inquiry into abuses at Guantanamo Bay. Gender coercion referred to ‘female military interrogators perform[ing] acts designed to take advantage of their gender in relation to Muslim males.’ Abuses including forcing male Muslim detainees to wear women’s underwear on their heads; rubbing perfume on them; forcing them to appear nude in front of women; sexually humiliating them; and smearing them with fake menstrual blood. Zero Dark Thirty includes a scene where interrogator Dan rips down detainee Ammar’s pants, saying, ‘You don’t mind if my female colleague sees your junk?’ He then walks away leaving Maya alone with Ammar.

Former CIA Director Michael Haydon argues that ‘the film conflates the abuses of Abu Ghraib and Guantanamo Bay with the more strictly controlled and clinical interrogation techniques he says were employed at CIA black sites.’ In this scene it is Maya’s (passive) presence, rather than her initiation of an action that constitutes gender coercion. She chooses not to exercise her agency to walk away or to intervene to stop the torture.

International lawyers have themselves considered the gendered implications of responses to September 11. Hilary Charlesworth and Christine Chinkin refer to the Hollywood campaign to present ‘patriotic, male images’ in countering terrorism. For Charlesworth and Chinkin, ‘September 11 and its repercussions have appeared, then, to be all about men attacking, saving lives, and responding through further attack’.

When President-elect Obama appears on a television screen as a backdrop to a CIA meeting and pronounces ‘America doesn’t torture’, the analysts’ faces are blank.

They continue their conversation without commenting on the interruption. The film portrays legal barriers to ‘enhanced interrogation’ techniques as putting lives at risk by preventing the CIA from getting the information it needs to prevent further acts of terrorism. One of the analysts says, ‘Who the hell am I supposed to ask? Some guy in Gitmo who’s all lawyered up? He’ll just tell his lawyer to warn bin Laden.’

The shots of Maya silhouetted against the sky recall the final scenes of the famous Western, The Searchers (1956). Maya’s search for bin Laden over, she is, like John Wayne’s character Ethan Edwards having found his lost niece, aimless. Yet while recalling The Searchers, the final shot in Zero Dark Thirty reverses the gender of the hunter and hunted. Civil War veteran Edwards searches for his niece who was abducted by Comanches in order to ‘save’ her from them by killing her; CIA Agent Maya searches for bin Laden in order to kill him.

Maya’s refusal to let petty bureaucracy (with which international legal norms against torture and targeted killing are largely equated) stand in the way of getting her man. This places her in the more ambiguous role of anti-hero(ine) or even outlaw. Those who see Zero Dark Thirty as a feminist film base their opinion on Maya’s break with a peaceful, passive role gendered feminine. When torture and war are equated with action, international law figures as a mere bureaucratic encumbrance.

This short analysis draws on Daniel Joyce and Gabrielle Simm, ‘Zero Dark Thirty: film, representation and international law’ (2015) 3 London Review of International Law 295. See also Daniel Joyce, ‘The Killing of Osama bin Laden: the facts are hard to come by and where is the law?’ 2 November 2015, OUP blog.